The issue of Travellers and where they can set up caravans is always a difficult one.  While the rule for the private landowner is relatively clear, it can be a more complex issue when the land is owned by the Local Authority.  Sadly, there are often situations where the Local Authority has the need to evict travellers from council land but what processes are in place for this? In this article, we explain everything you should know about how to evict travellers from council land.

Is your land occupied by travellers? Click to contact us today for fast and professional traveller eviction services.

Can travellers park on council land?

Whilst there are a number of Civil laws in relation to travellers parking on Local Authority land. These range from Section 77/8 to Civil Procedure Rule 55, there is Sec 61 of the Criminal Justice Act where the police can move travellers on if certain criteria is met. However, whilst we know that our Police Forces do an amazing job, dealing with illegal encampments is not high on their agenda. There is also the most effective route of Common Law. Where no Court Order is required, with Local Authorities providing that the welfare assessment have been completed then there are no issues with using common law. However, most Local Authority will prefer to use the legal route of Sec 77.

How long can Travellers stay on council land?

The Local Authority will also consider how many vehicles are suitable for the area and what the land is usually used for.  It may also look at what the land may be needed for in the near future.  Damage to the land and effect on the local community are also factored into how long they will allow the Travellers to remain on the land.

How to evict Travellers from council land

If you are a private landowner, we recommend that Common law be used to evict travellers, as in most cases this can be completed the same day as receiving instructions. There are a number of factors that should be taken into consideration when planning an eviction, but these can be discussed on receipt of instructions.

If you are a Local Authority and currently use CPR 55, if we may suggest you consider opting for Section 77, this is quicker and much cheaper than apply for a County Court Order, then waiting for the County Court Enforcement Officer to be available. Using Sec 77 in the Magistrates court will allow the Local Authority   to apply one day have the order the following day, arranging for the eviction with 48 hrs. Rather than 7-10 days.

More details are listed below for your attention.

Read our Case Study to learn how we helped Plymouth City Council to evict travellers from a city park.

Can the Council remove travellers from council land immediately?

There are a few places that they cannot use and will face immediate eviction if they try to set up their camp there. These include:

The options for evicting Travellers from council land

There are a few routes that can be used to evict an unauthorised encampment from council land, depending on what is happening.

The most frequently used route for traveller evictions is a common law notice.  This doesn’t require the involvement of the courts so will be much quicker than other routes.  However, it doesn’t incorporate any penalty against unauthorised occupants if they return to the site.

In other words, the council can serve an eviction notice to the Travellers today and they can return next week.  Then the process would need to be repeated again.  This could happen a countless number of times and that is why the councils sometimes use the slower routes involving the courts.

To use this route, the council would need to provide:

A Writ of Possession is used most frequently if there is a larger group of travellers or there may be an issue with harm to people or property damage.  The main benefit of this route is that the police must support the writ so there is extra-legal backing for the council staff.

This option cannot be used by town or parish councils, only by a principal authority.  It allows the removal of individuals from the land and requires the involvement of the Court when they do not leave as they have been notified to do.

If they return to the site within 3 months, there are also criminal sanctions built into the process.

The final option can be used by landowners but also local authorities including town and parish councils to remove people from the land.  It requires a County Court procedure and there are criminal sanctions if they return to the land within a 3-month window.

Can the court refuse to grant the council an order to evict Travellers?

The courts do have the right to refuse the council the right to evict travellers.  Usually, this is done if there is an unavoidable reason for the Travellers to remain on the site.  Alternatively, they may decline it if the council has not made adequate enquiries about the health and wellbeing of the people on the site before going to court.

How long does it take to evict Travellers from council land?

How long the process takes depends on the route that the council plans to use to evict the Travellers.  A Common law notice can take as little as 2-3 days to complete but anything that involves the courts will normally be longer.

Once the procedures are followed to start the process, a court hearing date will be set.  But there’s no firm time frame that everything must be completed within.

What happens if Travellers refuse to leave council land?

If the Travellers refuse to leave when issued with a Common law notice, then the council will seek to use one of the legal routes to remove them from the site.

If they refuse to leave when a court order or writ is in place, this is a criminal office.  The police have the right to tow away vehicles and destroy them if not claimed within 21 days.  The Travellers themselves can also face fines or even prison sentences if convicted.

What happens if travellers return to council land?

With the Common law process, the Travellers can return to the site in any time frame and there is no legal penalty for doing this.  The council would simply have to repeat the process.

However, if there is a legal process in place to remove them from the land and they return to it within 3 months of eviction, then the police can get involved.  Again, there can be fines and even prison sentences and vehicles can be removed and destroyed.

What can be done to stop further illegal encampments on council land?

In 2013, the government introduced a range of measures to make it easier for the council to stop illegal encampments.  These included:

The aim is to make it easier for councils to designated land as being off-limits for Travellers or anyone seeking to set up illegal encampments.  Or if something does happen, the process is quicker than before.

Here at Able Investigations, we are an enforcement agency that has worked with councils across England and Wales to help deal with evictions of Travellers from council land.  From process serving and tracing to evictions under Common law or a Writ of Possession, we can work with you to make the process as smooth as possible while always working within the laws and best practices. 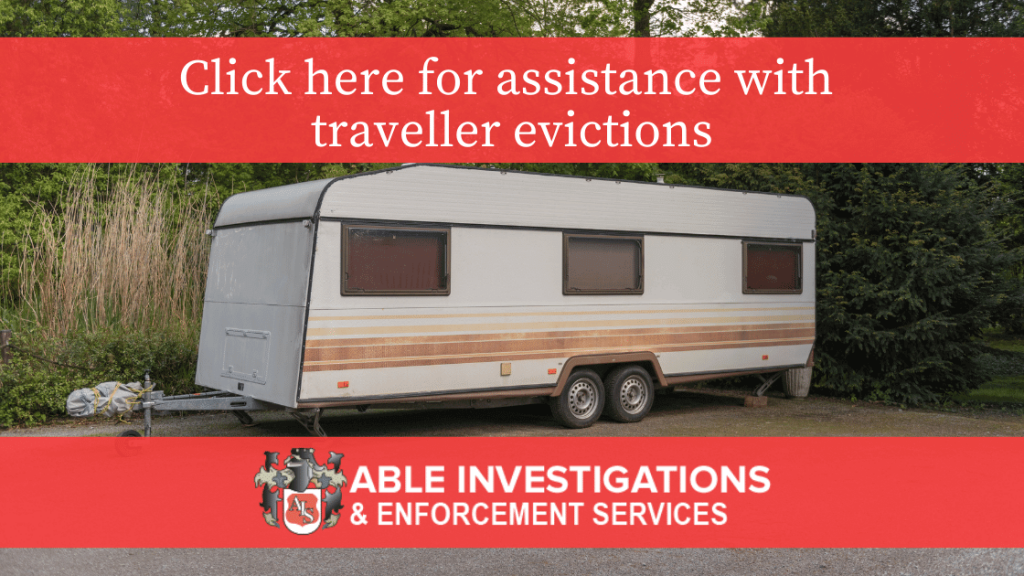 Steve Wood is Managing Director of Able Investigations with over 25 years experience in enforcements and investigations. Writer of two books, Steve is a renowned expert on Bailiff Enforcement action, Bailiff Law, traveller removal, tracing techniques and process serving.
View all posts by Steve Wood →
How long does it take to evict a tenant in the UK?
Case Study: The Implications of not Evicting Squatters from Your Land